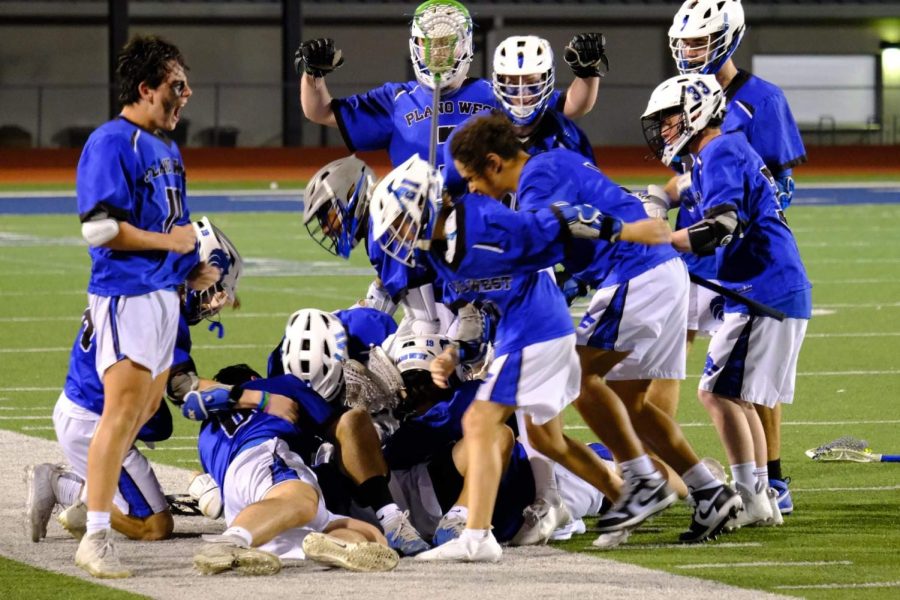 The Lacrosse Team headed into their season on February 4th, with an away game at John Paul II, and their first home game was on February 18th against Plano at Clark Stadium. They are extremely excited to start this season after a successful season last year, and recruiting athletes interested in playing lacrosse.

“Plano West Lacrosse Club has no tryouts,” said Patrick Gattelaro, senior and co-captain. “By playing for West, you’re guaranteed playing time as long as you show time and effort.”

Gattelaro described the club as very welcoming, and a place for athletes looking to  be a part of a brotherhood on and off the field, saying its an excellent place to build memories and relationships.

“You don’t need any experience to be able to play,” said Mason Murphy, senior and co-captain. “Usually during practice coaches or even older players will help you get to know the basics; you won’t be forced to learn on your own.”

Their sudden death win against McKinney brought them to the finals last season, even with their small number of players compared to other schools in the district.

“Our last season was a great season, and I think it set us up for a great season now because we fought through adversity which has helped us become better players for the new season,” said Dylan Walrich, senior and co-captain.

Walrich said he is excited for the upcoming season since they saw a lot of new faces join their team, but hopes that more will try out after learning about the sport.

“I was in second grade and thought that I would give lacrosse a try because it seemed like an interesting sport,” said Reed Richards, senior and co-captain. “After trying it out for the first time I thought that it was really fun and I have been playing in the Plano West program for the last 11 years.”

Lacrosse practice is held at the SAC on the south side of campus during the week, and fields beside Renner Middle School on Saturday’s. They also have team workouts at an athletic facility near Carrollton. If any student at Jasper, Shepton, or Plano West is interested in joining, just reach out to their instagram, email their sponsor, or show up at practice.

The schedule and updates for games are on their website if students are interested in going to a game or event they host, at planowestlacrosse.com.