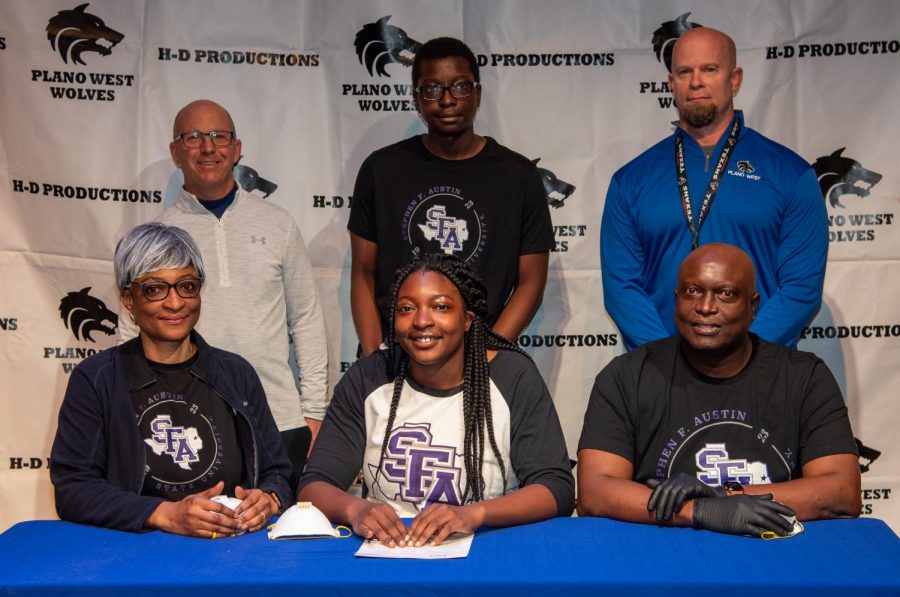 Earlier this spring, Michelle Ogbemudia signed with Stephen F Austin state university to continue her career in track and field.

Ogbemudia’s high school career concluded with a fifth place placement in the state Track meet for shot put in Austin, TX on May 8th, after she won the Region 1-6A Championships for shot put.

She chose Stephen F Austin for a number of reasons, athletic, academic, and social. In addition to the coaching and academics available at the school, she was inspired by the “family-like atmosphere” on the campus, as well as its relative closeness to home.

“SFA is the perfect school for me,” she said, “because of the location and distances, and the student body matches my energy.”

Unlike students who may have started their athletic careers as early as preschool, her involvement in track and field began late in middle school.

“My friends in the eighth grade thought it would be a good idea to try out for track and field,” she said,  “and I’ve been it in ever since.”

For the past five years, Ogbemudia has been consistent in her pursuit of excellence in her sport. Although she plans to major in marketing, and pursue a career as a marketing manager, the lessons she has learned from her high school track career have helped to pave her way toward sucess.

“The most important lesson track has taught me is that hard work pays off,” she said.  And for Ogbemudia, it certainly has.