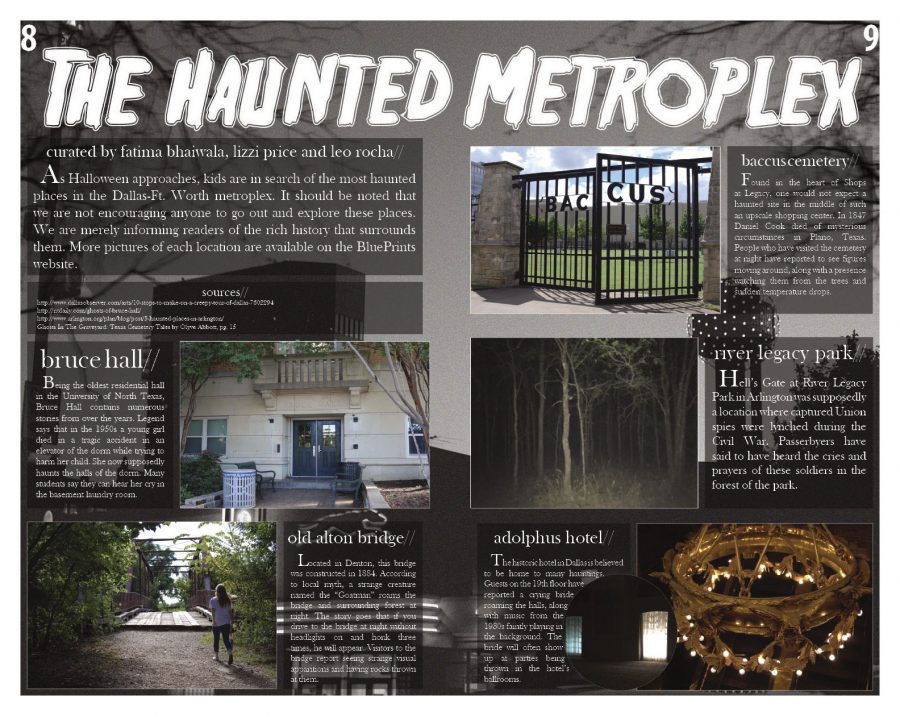 As Halloween approaches, kids are in search of the most haunted places in the Dallas-Ft. Worth metroplex. It should be noted that we are not encouraging anyone to go out and explore these places. We are merely informing readers of the rich history that surrounds them. More pictures of each location are available on the BluePrints website.

bruce hall//
Being the oldest residential hall in the University of North Texas, Bruce Hall contains numerous stories from over the years. Legend says that in the 1950s a young girl died in a tragic accident in an elevator of the dorm while trying to harm her child. She now supposedly haunts the halls of the dorm. Many students say they can hear her cry in the basement laundry room.

old alton bridge//
Located in Denton, this bridge was constructed in 1884. According to local myth, a strange creature named the “Goatman” roams the bridge and surrounding forest at night. The story goes that if you drive to the bridge at night without headlights on and honk three times, he will appear. Visitors to the bridge report seeing strange visual apparitions and having rocks thrown at them.

baccus cemetery//
Found in the heart of Shops at Legacy, one would not expect a haunted site in the middle of such an upscale shopping center. In 1847 Daniel Cook died of mysterious circumstances in Plano, Texas. People who have visited the cemetery at night have reported to see figures moving around, along with a presence watching them from the trees and sudden temperature drops.

river legacy park//
Hell’s Gate at River Legacy Park in Arlington was supposedly a location where captured Union spies were lynched during the Civil War. Passerbyers have said to have heard the cries and prayers of these soldiers in the forest of the park.

adolphus hotel//
The historic hotel in Dallas is believed to be home to many hauntings. Guests on the 19th floor have reported a crying bride roaming the halls, along with music from the 1930s faintly playing in the background. The bride will often show up at parties being thrown in the hotel’s ballrooms.