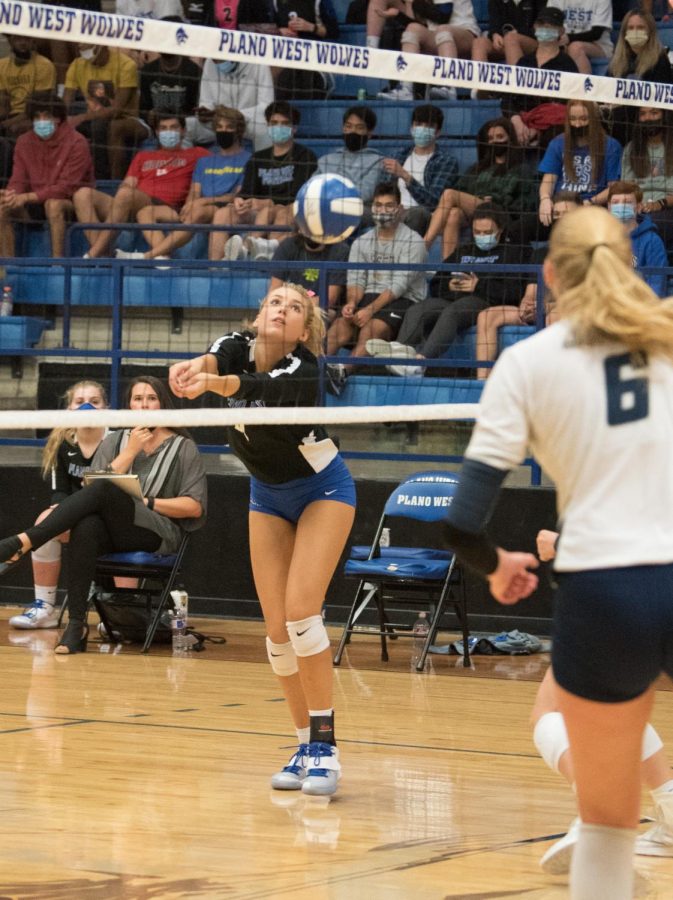 After Plano Senior served the ball and got an out, senior Ashley Le served for the Lady Wolves, scoring the second point of the night mere minutes after the game began. This beginning was a good prediction of how the Oct. 23 game would go as the Lady Wolves won three matches to one.

“This was the second time playing Plano Senior so I felt confident that we would do well and follow the game plan to win, which we did,” setter Ashley Le (9) said. “Currently I am pleased with ourselves and know we can only improve from here.”

Le, who is a senior, along with several other players, like senior Lindsey Zhang, led the Lady Wolves to a win for the first set and match 25 – 16.

“The most memorable moment this season was definitely beating Flower Mound in five sets,” libero Zhang (2) said. “They were ranked first in the state and nation so it was a huge upset.”

This is a memorable moment since Plano West won second place state champs in the 2019 volleyball season. Even with wins, the team has not gone without facing challenges including the pandemic.

“COVID has changed a lot of procedural things in terms of practices and games,” Zhang said. “Teams are being quarantined left and right, which leaves us having to reschedule games.”

The Lady Wolves have come back this season ready to show they are still here. The Oct 23rd was the eleventh win for the lady wolves in what so far has been a fifteen game season, they recently won their thirteenth game on Oct. 27.

“The biggest challenge I would say is getting us back on the radar. We graduated multiple D1 seniors last year so the underclassmen are unknown and people think we fell off as a program,” Le said. “Little do they know we have underclassmen with just as much talent as well as 10 seniors with experience so we are just as good as we were last year. I guess it could be seen as an advantage since people don’t know much about us.”

Even after starting off the season with a loss the team has put themselves back on the radar. Each player accomplished things individually and as a team.

“My biggest accomplishment from the game against Plano Senior was going on a big serving run,” Zhang said, “ running down several defensive balls that were far from me.”

The Lady Wolves each have an event from the most recent game that ranks as a personal accomplishment, but what they saw as the most memorable was similar. Both Le and Zhang agree that the crowd’s energy from the game was what made it memorable.

“There was nothing that stood out [from the game],” Le said. “But just the overall energy was super fun and always a memorable factor when playing.”