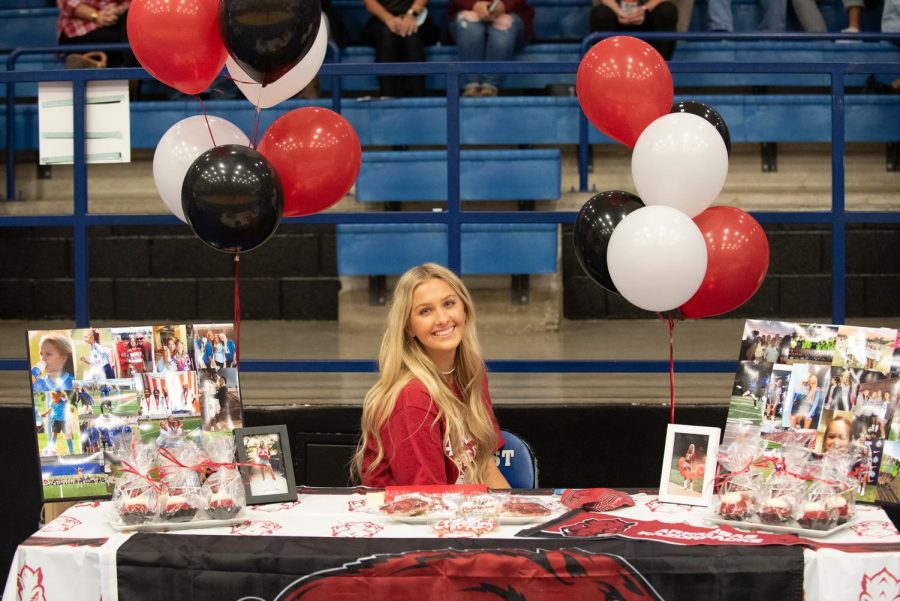 Brooke Roberts, a soccer player on the PWSH Varsity Girls Soccer, signed with the University of Arkansas this past month on Nov. 11.

“Soccer is my favorite sport because it is so much fun being in a competitive environment while being surrounded by my best friends,” Roberts said. “I have played since I was 4 years old so it is [has] pretty much always been a part of who I am.”

Growing up with the sport, Roberts knew that it will continue to be a part of her life even after graduation.

“When Arkansas offered me I was super excited,” Roberts said. “I had a lot of options but when they offered I knew that’s where I wanted to be, and I did not think twice about any other schools.”

It was important for Roberts that she went to a place that met all of her wants and needs, but a bonus was that she already knew people who attended and loved the school.

“Arkansas is the perfect fit for me because it is not too far away from home, [and] four of my best friends [are] on the Arkansas soccer team already,” Roberts said. “My brother goes there, I love the campus, and their soccer program is insane.”

Other than continuing her journey with soccer, Roberts shares that she isn’t fully sure on what she sets out to study, but has a basic idea of what she wants.

“I am either going to major in political science or criminal justice,” Roberts said. “I am [just] not sure yet.”

Jackie Kerestine, the head girl’s soccer coach, knows that Roberts will excel in anything she chooses to study and offers her advice on her future as a bright athlete.

“Embracing all of the challenges of being a student athlete is what makes you so unique and amazing,” Kerestine said. “But pushing through those tough times during two days or after you lose a big game are going to make the good times that much sweeter.”

Knowing that a bright future awaits Roberts at the University of Arkansas, Kerestine is proud of her growth as an athlete and a future leader.

“These girls show me that they are leaders, hard workers, team players, brilliant minds, and so much more,” Kerestine said. “The most outstanding characteristic of [Roberts] that has led to successes is [her] drive. [She] have wanted to play at the next level and did whatever it took to do so. That is a quality that nobody can teach and for that I am so proud of [her].”