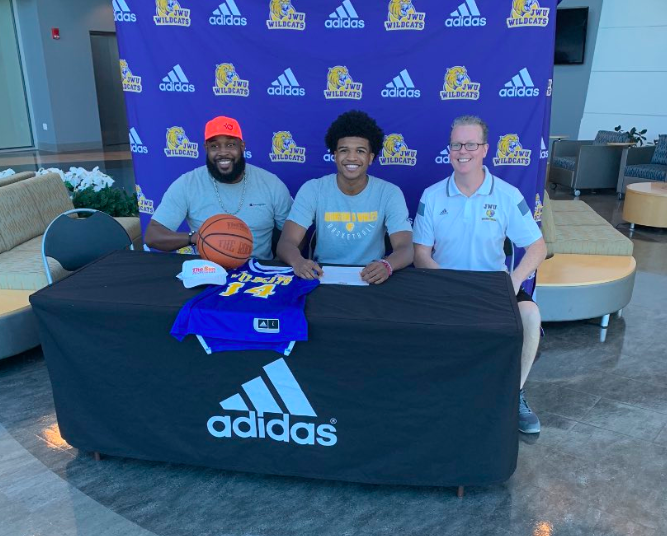 Plano West defeated Plano East on Tuesday night by a score of 69-58 to help increase Plano West’s record to 15-7.

“It feels good [to beat East],” Minor said. “East is our cross-town rival so it was a game we needed to win. I think our bigs did a great job of rebounding and making free throws down the stretch to secure the win.”

Minor shot 61 percent from the floor and helped contribute to a 49 percent field goal rate from the game. He also had three 3-pointers and made six free-throws on seven attempts.

Plano East was led by Jackson Davis and Evan Williams, who scored 13 points and 12 points, respectively.

“With my hometown being Miami Florida and my dad being alumni of Johnson and Wales it was a no brainer for me to commit [there],” Poindexter said. “I love the system Coach Graham runs over there and I am excited to see what the next four years have in store.”

The Wildcats, who are members of the Sun Conference, are 8-20 on the season this year. Poindexter scored four points in Plano West’s 52-65 loss to Bishop Lynch in the FWISD tournament over the break.

Ryan Zambie leads the Wolves in average points per game with 15. His brother, Alec, leads the team in rebounds per game with six and is second in total points scored with 83. Daylen Minor leads Plano West in assists with 4.2 and in steals with two per game, and Shemar Pearl is averaging approximately two blocks per game.

The Wolves will continue the tough district schedule ahead of them when they take on the Allen Eagles this Friday at home. The Eagles, who are the defending 6A State Champions, are 15-1 on the road with their only road loss coming against Denton Guyer. Tip-off will be at 7:30 p.m.

Plano West is fourth place in the district behind Jesuit (19-3), Allen (23-2), and McKinney (7-7). After Plano West’s home matchup at Allen this Friday, three of the following five games will be on the road. The Wolves will host Jesuit next Monday before playing at Plano and McKinney Boyd. They’ll return home on Jan. 25 to host McKinney and then will play Prosper four days later to round out their January schedule.

“My goal for the team really is for us to play together and keep gaining chemistry,” Poindexter said. “We are a talented group and when we are clicking on all cylinders, there is no reason we can’t make a run to State.”

The Plano West Lady Wolves have recorded a 14-9 record through 25 games into the regular season. They won their first five games of the season, beating Frisco Memorial, Frisco Liberty, Arlington Lamar, Argyle, and Mansfield Summit before losing their first game.

As of late, however, the Lady Wolves have hit a cold streak, losing their last five contests. They were handed a 10-point loss by DeSoto and a nine-point overtime loss by Marion (Arkansas) three days before the start of the New Year. With the start of official district play, they were defeated 53-50 by McKinney, 59-36 by Prosper, and most recently 59-53 by Plano East on Tuesday night.

Senior Morgan Smith led the Lady Wolves in points in Tuesday’s loss with 15. She was followed by Amaya Brannon, who had 12, and Zoe Makler, who had nine. Smith also led the Wolves in points with 12 in West’s loss to Prosper, accounting for a third of the team’s scoring.

The Lady Wolves will head to Allen on Friday night to play a dominant Eagle team that has gone 21-6 since the start of the season. Allen is tied for first with Prosper and Plano in the district for wins, as all three teams have 21 games to put in their respective win columns.