Are You Ready, Kids? 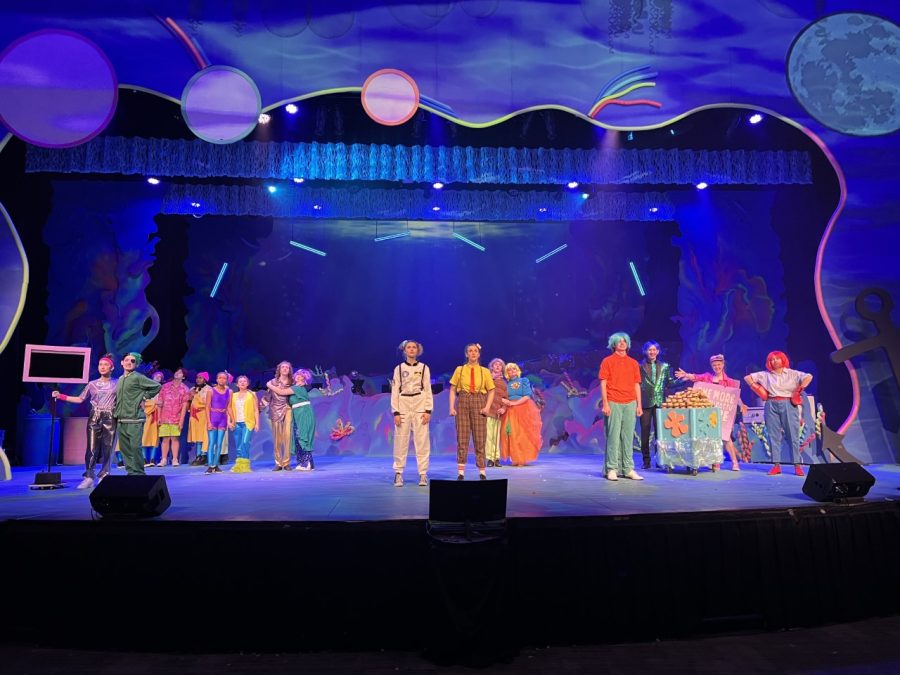 ‘Spongebob the Musical’, the annual school musical based on the hit Nickelodeon animated television series, was in production for the past several months, and the cast and crew prepared diligently for opening night, February 6th, 2022.

The school musical is a yearly production put on by the Theatre Department, combining elements such as acting, singing, and dancing. This allowed students from all different fine arts areas to participate in the performance.

Ripley Cooley, a senior, was tasked with portraying the seminal, (and lead role), Spongebob Squarepants.

“I don’t think there’s any other character quite like Spongebob. To play him, I can’t just put on a hysterical, upbeat persona, but I must become a real-life cartoon character…When you’re faced with recreating such an iconic character, everyone has this idea of what they’re expecting to see; you don’t want to disappoint them. But I think as long as I put my all, people will find satisfaction and joy in the show,” Cooley said.

Ty Lam, a junior, was chosen to play Spongebob’s sidekick and best friend, Patrick. He explained that the rehearsal process, to him, felt equally rewarding as it was bittersweet, nearing the final rehearsals leading up to opening night.

“The preparations for Patrick have been difficult. There is this level of extravagance that is required for playing these characters we grew up with. Their bright color and animated features are something that we, as actors, must be able to embody without the true framework. The biggest challenge I’ve faced is allowing myself to play. To not fear what people might think about you, but instead, leaving all the embarrassment aside and letting myself have fun for a bit.” Lam said.

Putting on a production as sensational as “Spongebob: the Musical” took a multitude of people to put together, including a run crew to bring Bikini Bottom (the set) to life, as well as an orchestra, and a handful of others.

Anna Norris, a junior, worked on the run crew.

“When the show is going on, I’ll be backstage helping actors and moving the prop pieces around as necessary. Leading up to the show I primarily paint which includes the major signs you see throughout the show.” Norris said.

A substantial part of Spongebob: the Musical were the extravagant music numbers. In true Broadway fashion, the musical featured a live orchestra combining both student and professional musicians, placed onstage with the actors, towards the back of the set.

Lucas Daniel, a junior, was one of the students that performed as part of the orchestra.

“Being able to play along with the actors [has been my favorite part of the process] because it felt as if the show was coming to life before my eyes. I have always loved Spongebob the Musical…when I got the opportunity to perform in the pit, I knew that I had to do it.” Daniel said.

Spongebob: The Musical took on a more modern-sounding orchestration, featuring music from genres such as: hip hop, rock, and rap.

Max Blackwell, a junior, was casted as the show’s villain, Sheldon J. Plankton. His character performed a music number titled: “When the Going Gets Tough”, which included a rap sequence.

“[Performing as Plankton] is extremely unique in its own sense because I’ve never rapped in a musical outside of Spongebob,” Blackwell said.

For many actors, this show was just another one to add to their repertoire. Sophia Floro, a senior casted as Mr. Krabs, and Hannah Hoffman, a senior casted as Pearl [Mr. Krabs’ daughter], have both been doing theatre since they were 6 and 9 years old (respectively).

“My favorite scene is a scene called: Daddy Knows Best, [a scene in which Mr. Krabs sings a song to his daughter Pearl about his love for money] because I get to just have fun being someone completely different from me, and I really get to let loose with movement.” Floro said.

The ensemble of Spongebob the Musical worked hard to help bring Bikini Bottom to life. They played town citizens, backup singers, and passers-by. To pay homage to the Nickelodeon show, many of the ensemble characters were pulled directly from the television series.

Walker Blackwell portrayed “Old Man Jenkins,” a character many who watched Spongebob are familiar with.

During the show, there was a scene in which Blackwell’s character got run over by a boulder, which he explained had been invigorating to act out.

“After getting run over by the boulder, my character pops back up as a cardboard cutout. It’s pretty exciting.” Blackwell said.

Some of the cast and crew submitted their favorite pre-show hype songs, and the playlist can be accessed at: https://open.spotify.com/playlist/7jNnF4v8Ltvi010Mpr4yPn?si=9f26bbc565c84160

Spongebob: the Musical took place February 6th and 7th in the auditorium in C building. Tickets can be purchased at: https://www.pisd.edu/domain/14369