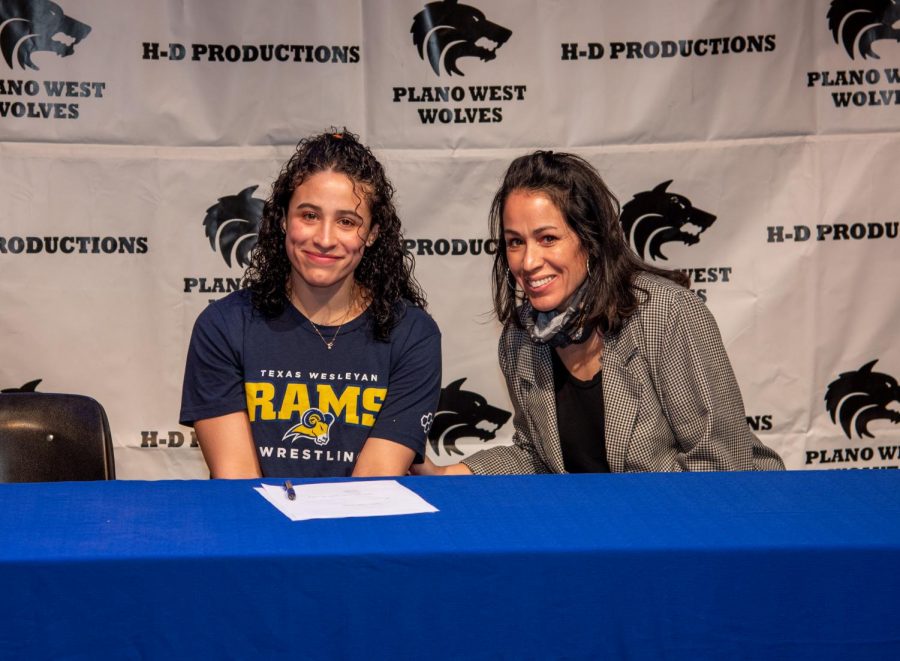 Leilani Hernandez, a wrestler on the Plano West Wrestling team, officially signed with Texas Wesleyan University this past month.

“I ended up ultimately choosing Texas Wesleyan University in Fort Worth, with all the other great School options and offers none were as good as this,” Hernandez said. “Basically a full ride. That was the ultimate specific factor that made me choose them.”

When asked why she chose to attend Texas Wesleyan, Hernandez revealed that it fits her majors and wrestling expectations perfectly.

“Perfect because I prayed about this decision so I know that is where God wants me, but to get to the nitty-gritty both majors that I wanna do are great there,” Hernandez said, “the newly upcoming girls team that the coach has been putting together are all primarily Texas girl hammers that I have grown in the sport with, I have wrestled tournaments and National teams with them so it is nice to not becoming in all new and such!”

“They are very sweet girls after the same thing I am with outstanding character,” Hernandez said, “truly the hardest workers I know. Aside from the girls, the University is only 1.5 hours away! I like my space but I like knowing at the same time the people that love me most are a highway away..and free food.”

Hernandez reveals that she tried wrestling in search of a new sport or hobby.

“I did not start in 6th grade or younger, like the majority of the women who go to college for wrestling, and I certainly did not do it because I like sports or I had a sibling/ parent influence…,” Hernandez said, “going into my freshman year I knew I wanted to try a sport so I just thought..I really liked nacho libre! Why not?..”

“I did not know what in the world it was I just thought it was like WWE and we would go flying in the air and roll around..” Hernandez said. “Picking my sport I also did not want it to be so strenuous and tough because I have never done a sport before, so what a perfect choice am I right?”

When it comes to learning lessons, Hernandez has learned much about hard work throughout her wrestling experience.

“I am not even being biased… UFC, MMA, and wrestling are the hardest sports, It is proven…” Hernandez said. “Even though any sport that you aspire to be the best in will come with challenging moments none compare to those of combat sports. These past 4 years wrestling has kicked my butt! I always thought the phrase blood, sweat, and tears was really corny but that is exactly what the sport demanded of me when I wanted to be great.  I cried not only out of frustration with the process but because it has traumatically challenged my body, it was exhausting, and it hurt.”

“It is just…hard,” Hernandez said, “no other word for it, wrestling really reveals who you are and your lifestyle, it has taught me to persevere in everything I do. To work hard, to give 110% of everything you do, and to want to be something of yourself…I think man, woman, boy, girl, should at least try wrestling, regardless you will get something out of it even if you are not serious about it… I was not for my first two years and look how things turn around!”

Hernandez has got her areas of study down to acting and kinesiology.

“Plot twist, my ultimate calling is to be an actress!” Hernandez said. “I am double majoring in theater and Kinesiology, and I forever will think wrestling will be a part of my life and I am so thankful God appointed me in it at the right place and time in my life.