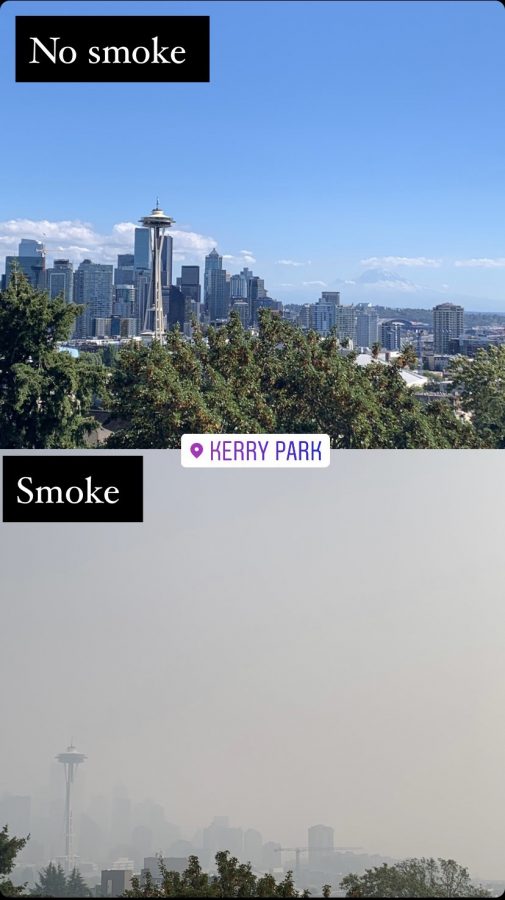 “It looks like the first scene in Blade Runner 2049,” Whitney Secor, a Seattle resident, said. “All I need is the ominous soundtrack to complete the movie vibe.”

While in most cases, California, Washington, and Oregon have some of the most picturesque landscapes in the United States, right now, a google search of images from the West Coast would be filled with images that look like they are from Mars or a post-apocalyptic world. The skies have turned orange and grey from smoke from the hundreds of wildfires that have laid waste to the land.

“The sky has gone through phases. When not with an orange hue, it looks like a Seattle winter sky of overcast,¨ Adrienne Rathy, a Seattle resident, said. ¨Except, it is not supposed to be overcast and it is not clouds, it is smoke.”

The smoke is not only from fires in Washington but also those in Oregon and California, where the fires have been just as destructive. So far, more than 4 million acres have burned in California. To put that in perspective, that is only 247,731 acres less than Connecticut. The smoke has covered more than just the skies.

“My wife and I have our cars parked in the driveway in front of our house and they are both covered in ash/soot/dirt from the fires,” Erik Holtzapple, a San Diego resident, said. “We were recently warned by our neighbors not to use only water to rinse off our cars as the ash is chemically caustic (like lye soap) and will strip the paint off our cars.”

The consequences of the fires and smoke does not end at the West Coast orange skies or soot-covered cars. The smoke has caused damage far and wide. Since the fires have started, the smoke has spread even further than the West Coast. It has spread across the United States and, more recently, across the Atlantic Ocean all the way to Europe. The question is, what is causing these fires?

“Climate change, hands down. Yes, fires have been man-made (looking at you gender reveal…), but how quickly they spread is solely due to how dry it is,” Rathy said. “Thus, we can’t contain them, making the wildfires worse.”

The gender reveal mentioned by Rathy is when a family in El Dorado, Cali used a smoke-generating firework to announce the gender of their child, causing an explosion starting a wildfire. The wildfire sparked over Labor Day weekend, is still burning, has burned over 21, 000 acres and led to a fireman’s death. However, the fires are not all caused by man-made accidents.

“We have a lot of scrub (called chaparral) and grass that grew when we had a very wet winter 2018- spring 2019,” Holtzapple said.  “All this grass/chaparral is now bone dry because we have had a very hot, dry 2020 summer (we had record-breaking heat-115F- the week the fires started). With all this dry kindling, fires can start easily from negligent people to natural causes like lightning strikes.”

This year the fires are worse because they came up earlier than expected; according to Holtzapple, fire season starts in fall (Sep. 21) and lasts until late November. So far, in 2020, there has been a record number of fires before the official fire season even started. The smoke has caused even more issues.

“The fires make you want to stay indoors and out of the smoke all day,” Chad Kennedy, a Seattle resident, said. “We had to have a family get together inside rather than outside this weekend due to the smoke.”

The question is, how is all the smoke from the fires across several states spreading? The answer is the Convergence Zone.

“The convergence zone is the area between the western Olympic Mountains and Eastern Cascade Mountains,” Secor said. “Essentially, the northwest winds in the upper atmosphere become split and cause an updraft between the ranges, directly through Seattle.”

While things like gender reveal mishaps, dry land and convergence zones explain the fires, meaning a small peace of mind is found in that at least the cause is known. Yet, mental health from the combination of fires and COVID-19 has been affected.

“A new normal during COVID is having friends over in the backyard to watch a movie or sports. This has allowed us to maintain a social life – our back yard allows for up to 3 groups of 2 at over 6 feet apart the whole time,” Rathy said. “While taking into consideration all precautions of open space, masks when necessary. We are unable to do that now, so the loneliness with COVID sets in.”

Even activities that used to be solo and deemed COVID-19 safe are challenging. Kennedy mentioned having to wear a mask to mow the lawn now and Rathy has seen people wearing masks to do easy and fast outdoor activities like take out the trash. Where masks were normal in public spaces, now they are worn to do the simplest of outdoor activities and some of which can not be completed while masked up.

“I cannot run outside or do my twice-weekly workout sessions with my personal trainer. It’s driving me absolutely insane. We had terrible smoke from wildfires about 2.5 years ago. I remember not thinking it was that bad and trying to run (2.8 miles). It hurt so so so bad,” Secor said.  “I found out later that simply being outside in the smoke for 30 minutes was the equivalent of smoking an entire pack of cigarettes! This time around, it is worse.”

The smoke from the fires has even affected people’s lives inside their own houses. Seattle is known for its cooler temperatures throughout the year. Due to this, many homes do not have air conditioning.

“At my house, we don’t have centralized air conditioning. What we have is a floor model with a hose for the living room that is connected to the window to take the air out,” Rathy said. “Because it’s not a perfect seal, we can’t use that for fear of smoke coming in. It gets balmy inside. For example, last night, it was 83 degrees in this room. We do have fans going (with air filters behind them), but it is hot.”

Not having A/C has never been the most significant deterrent for West Coast living. Neither has wildfire season. However, the fires make life a bit more complicated for a few months.

“They make the end of summer a tough time and something you just look forward to getting over,¨ Kennedy said. “It makes me ready for fall to hit and the rains to return. September used to be one of our nicest months, and now you just want it over.”